Customizeable embeddable multi-angle player & API
Thanks to our encoding power, live multi-angle selection comes to life, making for a more powerful and engaging experience for viewers. The multi-angle player can be embeded and customized to fit your brand’s environment — take it one step further and cater its capabilites to your needs with our customizeable API.
discover our media services
‹
March 19, 2021
|
Published by
Mobii Systems
The opportunity of in-stadium technology 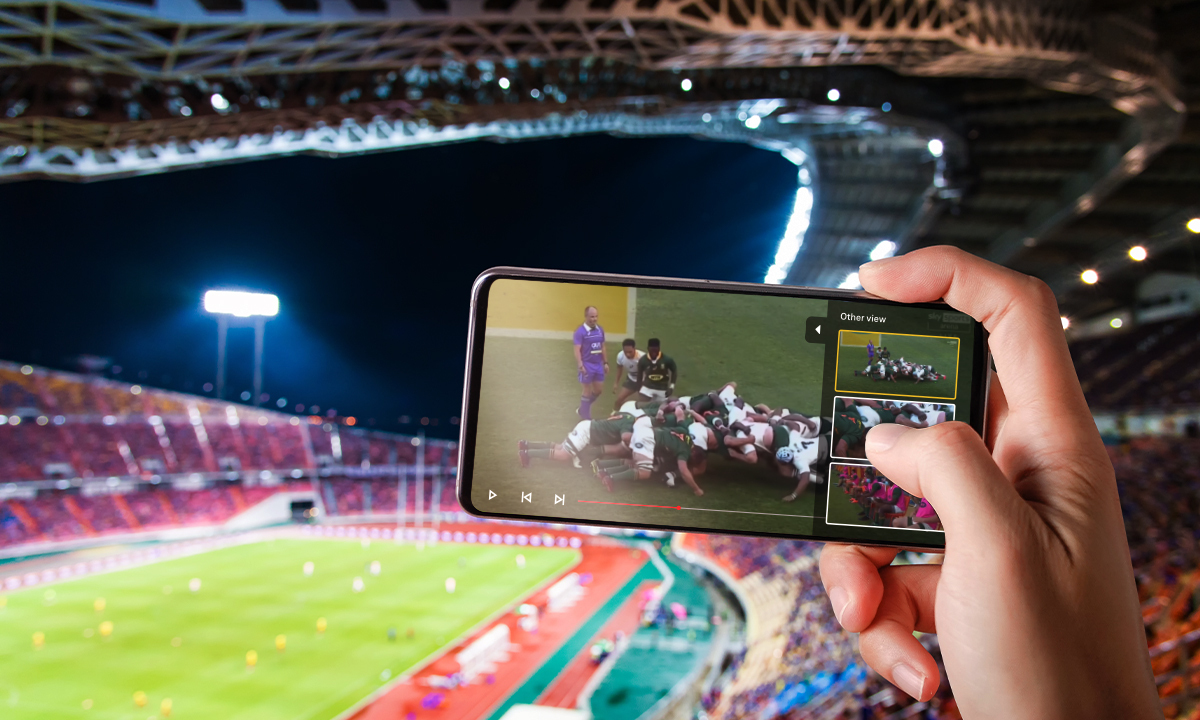 When it comes to opening up opportunities for fan engagement in physical venues, the most obvious one is a stadium.

This type of building is popular worldwide and can accommodate any audience to experience a wide variety of sports: from football to basketball, from rugby to cricket. The largest stadiums can hold more than 120,000 people, and some have seamlessly adopted new technologies to provide a more immersive experience for attendees.

Take, for example, what happened with the SK Happy Dream Park stadium in Incheon, South Korea. The venue, home of the baseball team SK Wyverns, was chosen for the opening day of the 2019 Korea Baseball Organization season. An image of the team’s mascot –a wyvern, which looks like a dragon– was displayed in a gigantic LED baseball screen and had an augmented (AR) and virtual reality (VR) interactive performance led by fans that engaged with a smartphone app. The event was streamed live and has since become a reference when it comes to using top-notch technology to make a memorable in-stadium experience.

However, not all stadiums have the resources to pull off this type of activation. The SK required two things that are not easy to have: the massive LED screen – the size of three basketball courts–, and in-stadium 5G connectivity to support the AR/VR interaction with the wyvern’s image. Consider that 5G connectivity relies on a national spectrum policy, and that a screen that size is not easy to accommodate for smaller venues or ones that are not destined for baseball games.

Fortunately, there are other high-tech alternatives that can be used for in-stadium activations or experiences –ones that are less invasive, less expensive and much more versatile.

Take, for example, OTT, or over-the-top streaming. Through MBB (mobile broadband), a feed can be created through various linked cameras, each with different angles and views. Then the OTT can livestream the event through an app or a website. This is usually a good alternative for fans that are outside the venue, but it could also be an innovative approach in-stadium: having attendees view a 360 view of the building they’re in, even if they stand from their seats and go to get a snack.

Another alternative is the use of low-cost, RFID labels. While these are more frequently utilized to track participants in mass participation sports events, they can also provide an innovative in-stadium experience. Disney World has been a pioneer with RFID labels. According to a report by Deloitte, Disney provided RFID enabled “MagicBands” to the customers that accessed the theme park. The MagicBands are linked to their credit cards so that they can be used for contactless purchases through the park and personalized offers from vendors.

Disney World is not a stadium, but it is easy to see how the use of RFID labels could be replicated in one. In a post-pandemic world, contactless payments allowed by a wristband could be an even more valuable perk that consumers might be willing to pay for.

One final alternative? Gamify the attendees’ experience. Whether they use virtual or fiat currency inside the stadiums, users could log into an app, engage with trivia or games related to the sports teams or athletes they’re watching, and engage with transactions.These can translate into actual physical products they can purchase, or any other type of virtual rewards.

The bright side of these in-stadium engagements is that, contrary to a massive LED screen or brand new infrastructure, most of them –perhaps not the OTT streaming if it requires a lot of physical intervention– can be used for stadiums that are not as modern, such as those built on or before the 1970s. RFID labels and their readers are not invasive at all, and gamification relies more on the users’ smartphones or other devices.